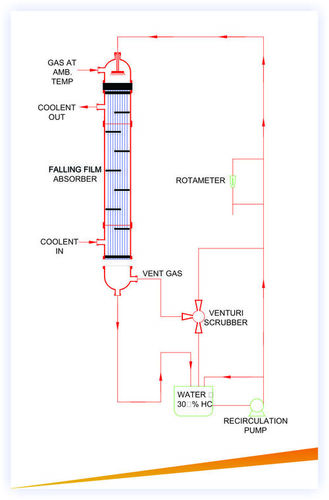 Falling film evaporators based on Shell & Tube Heat Exchangers are available for the evaporation of temperature sensitive substances and those tend to form useless residues by condensation or polymerization.

In falling film evaporators, liquid and vapors flow downwards in parallel flow. The liquid to be concentrated is preheated to boiling temperature if require. An even thin film enters the heating tubes via a distribution device in the head of the evaporator, flows downward at boiling temperature, and is partially evaporated.

The liquid to be evaporated is evenly distributed on the inner surface of a Glass tube. The liquid will flow downwards forming a thin film, from which the boiling/ evaporation will take place because of the heat applied by the steam. The steam will condense and flow downwards on the outer surface of the glass tube. A number of tubes are built together side by side. At each end the tubes are fixed to tube plates, and finally the tube bundle is enclosed by a Shell made either of Steel or Glass depending upon the steam pressure. The steam is introduced through the shell. The space between the tubes is thus forming the heating section. The inner side of the glass tubes is called the boiling section. The concentrated liquid and the vapour leave the evaporator at the bottom part, enters the subsequent separator tangentially from where the concentrated liquid is discharged (usually by means of the pump) from the bottom and vapor leave the separator from top.

Falling film evaporators can be operated with very low temperature differences between the heating media and the boiling liquid, and they also have very short product contact times, typically just a few seconds per pass. These characteristics make the falling film evaporator particularly suitable for heat-sensitive products, and it is today the most frequently used type of evaporator.

However, falling film evaporators are designed very carefully for each operating condition; sufficient wetting of the heating surface by liquid is extremely important for trouble-free operation of the plant. If the heating surfaces are not wetted sufficiently, dry patches and incrustations will occur; at worst, the heating tubes will be completely clogged.

The proper design of the liquid distribution system is critical to achieve full and even product wetting of the tubes. This is specially designed by Garg Scientific.

Because of the low liquid holding volume in this type of unit, the falling  film evaporator can be started up quickly and changed to cleaning mode or another product easily.

Falling film evaporators are highly responsive to alterations of parameters such as energy supply; vacuum, feed rate, concentrations, etc. When equipped with a well-designed automatic control system they can produce a very consistent concentrated product. 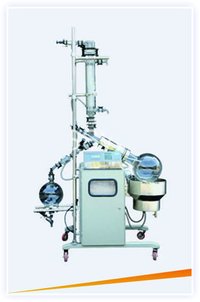 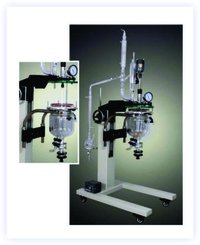 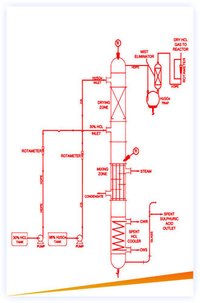 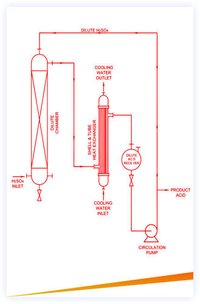 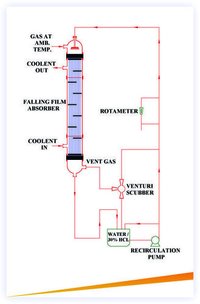